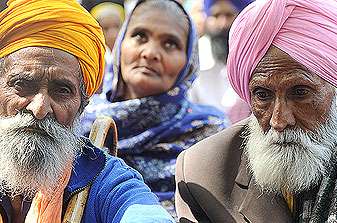 Relatives of people who were killed in the 1984
riots demonstrate in New Delhi. The protestors were
demanding homes, jobs and compensations from
the government.


For the first time, the CBI has called the 1984 anti-Sikh riots a conspiracy of “terrifying proportions” involving then Congress MP Sajjan Kumar and the local police. Just how terrifying the conspiracy was was brought out in the testimony of a victim, heard in court for the first time in 27 years.

Nirpreet Kaur was all of 16 when she witnessed the mass killings that followed the assassination of then prime minister Indira Gandhi. A happy teenager with two plaits and a spring in her step, the riots changed her life forever.

Of the bodies strewn around the bylanes of Raj Nagar in the Capital’s Delhi Cantonment, one was of Nirmal Singh, Nirpreet’s father. The girl also saw Kumar standing in a police jeep and ordering the killing of Sikhs.

Nirpreet, an eyewitness to her father’s murder, was never questioned. The court summons was sent to a wrong address. Had she known her father’s death was being tried in court, she would have given the same hair-raising testimony that she did in 2011 when the probe was entrusted to the CBI.

CBI prosecutor RS Cheema, while concluding his arguments in the sessions court, has spoken of the “complicity of the police and patronage of local MP Sajjan Kumar” in the riots conspiracy.

Only one FIR (416/1984) was registered for the killing of 30 Sikhs in Delhi Cantonment and against unknown persons. While 10 were charged finally, Kumar never figured as an accused.

Nirpreet’s memories of her father’s killing are still fresh. “The mob caught hold of my father and sprinkled kerosene over him. They didn’t have a match-box, and a policeman standing there said, ‘Doob maro, tum se ek sardar bhi nahi jalta’ (Shame on you! You people can’t even kill a Sikh),” she said.

“When the mob moved a little ahead, my father jumped into a nearby nullah. Seeing my father alive, the mob returned and set him on fire again,” Nirpreet said.

Nirpreet’s home was burnt down. She and her mother took shelter at a nearby gurdwara. When she went back towards her home the next morning, she saw a mob and heard slogans.

FIR no. 416 didn’t yield any justice. Kumar was never named. The eyewitnesses never made it to court and all the 10 accused were acquitted. The police, which had conspired with the rioters, were both the investigating and prosecuting agency.

That’s perhaps the reason why Kumar now faces legal heat in a case well chronicled, except in the Delhi Police’s own records. Imagine, despite eyewitness accounts, his name never cropped up in any police chargesheet.

This was a terrible tragedy and loss of innocent lives, including -of all places - murder in a place of worship devoted to God, the holiest Sikh Gurdwara. What an awful crime against humanity.

I always remember the words of Blessed Pope John Paul II upon hearing of this tragedy, he expressed solidarity with the victims:


"...In recent days there has been news of ever more serious happenings in the State of Punjab in India, tragic events that have registered the sad total of several hundreds of victims and that unfortunately do not yet appear to have ended. It is not my wish to go into the delicate and complex reasons that are at the root of these disturbances in a great country that is a crucible of races and ancient cultures and, what's more, enlivened by a keen religious sense. But it is a saddening fact that the place where so many people met a tragic death is in a temple where people are accustomed to gather for prayer. May a sentiment of human pity arise immediately for all victims, accompanied by that prayer that in mutual understanding the way to settle the present conflict may be found..."


Apart from the Pope however, there was a shocking silence from many other religious leaders, as the writers of Sikh Review explain:


"...The Sikhs agony was all the more hurtful because, in June, 1984, leaders of other communities remained silent – even jubilant-onlookers. One wonders how the religious people of India could suffer such calamity as Operation Bluestar to happen without demur. The Shankaracharyas and the Shahi Imams merely watched and shrugged, their silence defeaning! It was, significantly, left to the Pontiff of the worlds 900 million Catholics in distant Rome, to show concern and sympathy. Addressing pilgrims at St. Peter's Square at Vatican City on Sunday, June 10, 1984, Pope John Paul II had said...But those in power were unmoved..."


And it would appear that Sikhs never forgot the Pope's solidarity with them. The most beautiful tribute I read in 2005 when Pope John Paul II died in Rome came from one of the writers of "Sikh Spectrum" KP Singh, who wrote this beautiful poetic tribute/obituary:

In death, as in life,
His spirit touched billions-
Followers, world and faith leaders, others;
Many saw in Pope John Paul II uncommon
Greatness, the radiance of an enlightened soul,
The heart and spirit of a humanitarian,
The determination of a faith-soldier
With unmatched courage and conscience,
The spiritual and temporal wisdom of Ages,
The sagacity of a beautiful mentor.

He came from humble beginnings
Yet he conquered the mighty, the masses,
Friends and foes alike;
Toppled formidable walls and barriers,
Asked us to open our hearts and horizons
Affirming lessons of love and human dignity,
Calling each to peace and in unity to serve
Enhancing individual and collective gifts;
He left an unmistakable moral imprint
On the human universe and its future;

In his passing we mourn, we remember,
Honor and celebrate his life, his legend,
His universal message and joyful spirit;
From dawn to dusk, in the millions -
A river of grateful humanity,
A sea of faces, cultures, faith traditions
Reverentially stood for hours in prayer,
Paid homage, a loving last respect
To this Good Shepherd among mortals.

A righteous man, a noble soul lay in State
Under the majestic dome of St. Peter’s
Ready for his final journey “Home”
Being blessed by the prayers and love
Of those whom he blessed and nurtured,
Ministered to and championed,
Challenged and summoned to their cause,
Their rights, responsibility to life and living,
Showed them the Way and the Light
Throughout his 84 years of earthly journey.

He took the sacred gospel to the people;
The “Vatican” traveled to the mountain,
Made countless pilgrimages to connect,
Came calling the faithful in their hamlets,
Performing masses in famous city squares,
Outdoor gatherings and sanctified shrines
On far-away continents, in countless countries
Enthralling his legions in the spiritual moment;
Those of other faith traditions and cultures
Marveling at this intense devotion, charisma,
Powerful presence and spiritual authority;
Calling interfaith gatherings; peace dialogues
Honoring sacred mandate to uplift humanity,
Advancing basic freedoms across the village.

Now in his death, the world gathered
Pilgrims arriving in trains, planes, on-foot
Kings, ruler, presidents from many lands,
Religious leaders of diverse faith traditions,
Turning the Holy Sea, the Eternal City
Into a spiritual capitol of the universe.

A mulitude of humanity paid rich tribute
In lasting images of love and adoration,
Fond farewell and intense admiration,
In grandeur and tradition at The St. Peter’s
With outpouring of gratitude, thanksgiving
In his native Poland and around the world
The like of which mankind has not seen.

The world watched beamed images in awe
Joined in “send off” to beloved John Paul
Worthy of a saint, tireless peacemaker,
Humanitarian and a messenger of hope;
Witnessing his magnificent legacy,
Splendor of his divinely-inspired life;
Immersing one last time in his Papal legacy:
Spreading the faith in pilgrimages of spirit,
Moral triumphs and celebrated milestones
Captured in memorable images and offering
Living testimony of this spiritual teacher
For all humanity and for the Ages.


"...As I reflect on the passing of His Holiness, the beloved Pope John Paul II, my heart is full with sadness and also immense gratitude for his life and legacy. He was a great messenger of hope and healing at a troubled time in human history. Yet he exuded boundless joy to all, within and outside the Catholic Church of which he was a shepherd and moral leader.
As a follower of Sikh faith, I admire the Holy Father's effort to reach out to other faith traditions. He reminded and inspired us all to widen the "Circle of Light and Love" that may embrace all of God's children. I find echoes of Sikh spirituality in John Paul's universal moral teachings, especially in his message of love, inclusion, compassion, and preservation of human dignity, justice and equal rights, and assurance of basic freedoms of people everywhere. He persuaded the faithful and powerful to this humanitarian and moral universal cause...

John Paul was, and will always remain, a spiritual teacher and moral force for the ages. We celebrate this rare soul who now joins all righteous warriors, noble saints, and all the wisdom of Ages in the Court of the Lord. His light and legacy will guide generations to come who may not believe that the like of him walked the earth and enjoyed the affection of billions at a time of so much global conflict and challenge. Thank you John Paul for touching us with your magnificent spirit.
Pope John Paul II belongs to all mankind and we mourn his passing and feel diminished by his absence. He lives in our hearts and mind and so does his awesome legacy. His life and spirit is the incredible legacy that will continue to inspire humanity through all times...."
- KP Singh
Last edited: Apr 29, 2012
Share:
Facebook Twitter Reddit Pinterest Tumblr WhatsApp Email Share Link