I travelled by bus from Patiala and reached Sri Amritsar on 9 June 1984. The entire route was badly barricaded and there were too many checks by soldiers and police. Every check made me feel as alien at the land which I had protected with my blood in 1965 and 1971. Feeling so belittled in my officer’s uniform by these cruel checks, I cursed the time when I planned to come, But knowing the facts was more important than my ego. However, this insult left a very bad scar on my mind till date. I was hoping that Sri Darbar Sahib was not treated as badly as was Patiala treated. It was the day after Giani Zail Singh had visited the complex on 8 June 1984 and his bandwagon was stated to have been fired upon. From the deserted type bus stop, I came on the main road and found a military jeep which had a Sikh Engineer Army officer in uniform as co-driver. I waved to him to stop. He was nice to give me a lift. I told him that I was sent by my unit to see Sri Darbar Sahib for for myself that it has not been damaged and to tell the same back to my troops after having seen it at the ground. He was going to Darbar Sahib as he had been assigned certain duties about clearing the debris and maintenance of structures. I asked him the details about the Army Attack on Sri Darbar Sahib.’ You can see for yourself”. He was reluctant to come out openly and preferred to speak little in the presence of other troops. The jeep entered from Guru Nanak Sarai where Sant Bhindranwale camped initially in room no 47.

He took me to the tower (Bunga) to give the view of the entire complex. 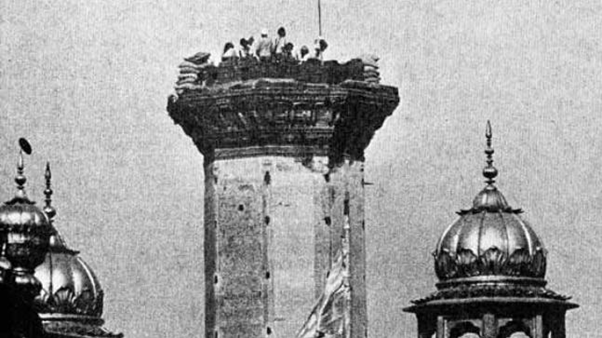 It was very badly damaged in the attack and we were very cautious going up. At the top what I saw was shocking. I could see the smoke still close to Library area.

The left side of Deodhi Saab appeared to be blasted off. Akal Takhat was nearly demolished.

There were some soldiers still on pickets on the buildings surrounding Safrbar Sahib complex. 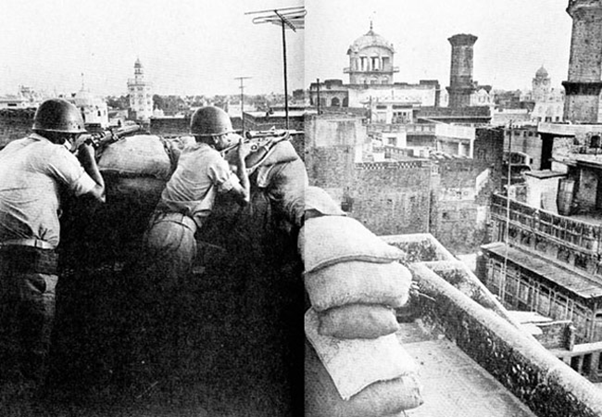 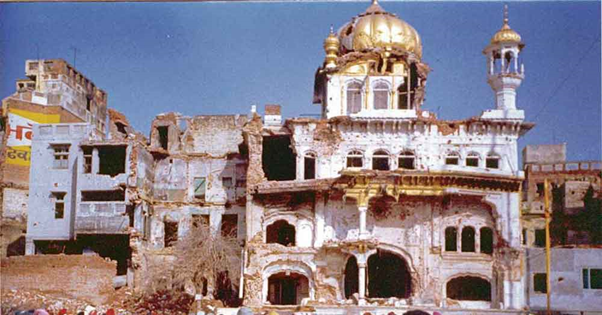 I saw certain gears (graries) on the top. I asked as to what these were. He said, “These are gears of a fodder cutting machine. Probably they were brought if these could be modified to make some weapon. But these appear to have not been used.” I quizzed, “They have been showing a lot of weapons with them. Did they have all these weapons?” He was clear, “I have been involved in clearance of the Gurdwara since 7 June. I have not found any complicated weapon or weapon of mass destruction. There could be no substantial weapons as stated. There were about 300 bodies littered all around the parikrama and about 50 bodies in Akal Takhat complex. Mostly they had local weapons. I also saw what was being projected on TV. I never found these in the complex” He was very clear in stating this. But this raised many questions. I asked, “How could they stand against this formidable Army at least a Division plus involved in attacking this complex.” He was uncritical in his answer, “I too do not understand this. Only I can say that they were too brave to stand such a great force. They cannot be more than 400 as could be seen from the bodies spread around. I do not think anyone could have escaped out of this from the hawk eyes of the Army when it was heavily bar3ricaded and surrounded from all sides.”

Shabad Of The Week For Vaisakhi
Happy Vaisakhi to all!! It was hard to pick something to discuss this week as Vaisakhi is all about commitment to the ShabadGuru and theforefore the entire Sri Guru Granth Sahib Ji is relevant...