I reached Patiala on 8 June 1984 and stayed with my brother who was posted in income tax department there. During discussions with him, I shared my experiences of 1984 with him. He was touched and felt pained at the turn of events but he had more than this in his kitty. He told, “You have faced this only for a day. We have been facing the same insult daily. My going to office or going for any purchases is full of such incidences. They treat all of us as terrorists”. “What happened here with you in those days?” I wanted to know. He stated: “It was not only Sri Amritsar but entire Punjab was under curfew. Not only Gurduaras but also any place of Gathering was deeply watched. Helicopters used to roam over our heads every moment of the day. No one was allowed to come out during curfew; not even for taking water, milk or vegetables. Whenever someone came out the helicopter will lower down and aim a gun at the person. The police roamed even in the street. Everywhere, you would find a check post. Even when there was relaxation to buy vegetables, grocery and milk the checking and questioning were intense. One felt so insulted that it is beyond words. How come all the Sikhs who were known for their patriotism suddenly became terrorists?”

“I am not only shocked but also deeply hurt inside. I did not know of this till now.” My reply was muffled.

“But that is not the end of it. There is too much more than this. We still face because we do not find to be in the worst position as faced by the Sikhs who went to pay obeisance at Sri Amritsar of other Gurduaras on those dreadful nights. The white paper later prepared by Government of India divulged 42 such gurduaras. One of these Gurduaras was Gurduara Dukh Niwaran just close to us.” His throat was full and he could hardly speak. I was jolted to the hilt to know about the attack on Gurduara Dukh Niwaran and other Gurduaras in addition to Sri Harmandir Sahib as I did not know anything about it due to blocked media.

“What happened at Gurduara Dukh Niwaran?” I was very anxious to know. Gurduara Dukhniwarn too was attacked on the 6th night. We heard tanks moving into the complex and there were 3-4 loud explosions followed by the burst of rifle and machine gun fires for many hours which could be heard all over. A part of the Gurduara complex lit up in flames, The entire area crackled with the sound. The person staying within the complex including the pilgrims had to face the wrath. As per the information not a single one was left alive; not even the children or the women. We saw floating bodies in the Sarovar as well. They had taken the dead bodies and burnt near village Badunger. I also went to see where the bodies were burnt. I saw iron bangles (Kadas) spread all around. These included small ones belonging to small children. I cry when I remember these scenes”. 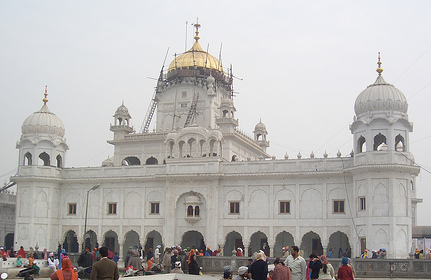 “I wish to see both these place.” I enquired. “We can go when the curfew is lifted”, he said. We visited the places at the time of lifting of curfew. I could see the marks of tank tracks in the area of a residential complex of Gurdwara Dukhniwaran. The blood of the innocent spilled on the ground was still fresh. The clothes, the ground, and the walls were all splattered with blood. The stench of the dead and the blown off pieces of the bodies could still be felt. Gurduara Sahib was in no way in a normal environment. Gurdwara Dukhniwaran Sahib is a historical Gurdwara. According to local tradition, supported by an old handwritten document preserved in the Gurdwara, ninth Guru of Sikhs Guru Tegh Bahadur, during his sojourn at Saifabad (now Bahadurgarh), visited and blessed village Lehl and its inhabitants so that they could be rid of a serious and mysterious sickness which had been their bane for a long time. The Guru visited Lehal on Magh Sudi 5, 1728 Bikram/24 January 1672 and stayed under a banyan tree by the side of a pond. The sickness in the village subsided. The site where Guru Tegh Bahadur had sat came to be known as Dukh Nivaran, literally meaning eradicator of suffering. Devotees have faith in the healing qualities of water in the Sarovar attached to the shrine. The place which was helpful I healing the sickness has not been attacked for no reason.

Everyone seemed tense. I enquired about Gurduara Dukhniwaran attack from a number of sewadars who told me the same things which my brother Dalbir Singh had told. Even at the burial site, one could see the iron bangles spread all around as stated by my brother. Ajaib Singh Gill, who was the manager of Guuduara Dukh Niwararan told that he performed the last rites of 17 dead. This was in addition to those taken and cremated by the Army.

As per an inquiry conducted by Justice Tiwana on the orders of Punjab Government, 257 people were shot and killed during the storming of Gurduara Dukh Niwaran Sahib in Patiala. It was mentioned that about 10,000 soldiers and paramilitary forces sealed Punjab on 01 June 1984. Worshippers and visitors were trapped not only in Sri Harmandir Sahib but also 42 other gurduaras which included Sri Harmandir Sahib, Sri Akal Takht Sahib, Amritsar, Sri Darbar Sahib, Tarn Taran, Sri Keshgarh Sahib, Anandpur Sahib, Gurdwara Dukh Niwaran, Patiala, Gurdwara Gurdashan Prakash, Chowk Mehta, Sri Muktsar Sahib, Muktsar, Gurdwara Nanaksar, Hakimpur, Nawanshahr Dukh Niwaran, Faridkot, Moga and Ropar. The amount of pain and problems the old, infirm and the children faced due to curfew and blanket ban on anyone going out of the house even for food and milk, are insurmountable I was not at all reconciling with the situation. How can they treat us with such dreadfulness? People, in general, did no wrong. The blanket ban on news about the blue star operation on TV, radio or papers was meant to hide the truth but the way the rumors were spread especially through Pakistan media and also on BBC, a fear psychosis had spread all around about the inhuman treatment of the Indian Army. There was no doubt that the Holocaust left a permanent scar on the mind of the Sikhs but there was none to heal this. It was well known that it was the result of politics and the rivalry between Giani Zail Singh who was the then President and the Darbara Singh who had just resigned from Chief Ministership. Smt Indira Gandhi took the advantage to teach the Sikhs a lesson. The night was too heavy on me. I do not remember if I had slept throughout the night!

Thank you for sharing these valuable stories, and allowing us all to learn.