The Punjab department of cultural affairs, archaeology and museums has recognised at least two structures in this historical town of Tarn Taran district as dating back to the times of Guru Angad Dev.

The formal linking to the second Sikh Guru qualifies the old Baradari (a building with 12 doors) at Gurdwara Tapiana Sahib and a well inside Mata Khivi Langar (community kitchen), both built in the 16th century, as heritage structures. The Guru’s major part of life was spent at Khadoor Sahib, where he preached Gurbani and developed the Gurmukhi alphabet. 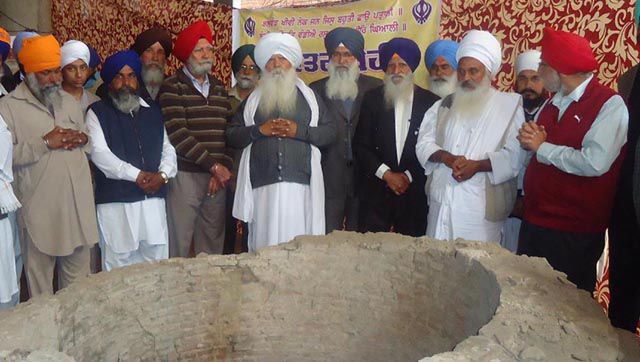 He also established “Mal Akhara” (wrestling arena), first of its kind in those days. The description of the sacred town can also be found in Sikh holy book Guru Granth Sahib. The state’s lone archaeological officer, Rajinder Singh Bath, visited the town recently after environmentalist and religious leader Baba Sewa Singh contacted the archaeology department about the structures. Baba Sewa Singh, a local, had requested the department to survey the town for identifying historical buildings for preservation.
“Rapid development is destroying the priceless heritage sites that archaeologists must protect by research and implementation of the laws,” Baba Sewa Singh had written to the department. The letter mentioned that the historical town had cluster of old buildings waiting to be saved.

At the end of his visit, Bath had identified Baradari and the well to be put in the category of heritage buildings. His team that examined all the architectural elements and the construction material, made a report that the Lakhauri brick (which is similar to Nanakshahi brick) design of Baradari was typical of 16th-century architecture. The well in the basement of the modern day Mata Khivi Langar Hall is also built of Lakhauri bricks.

The archaeological experts found evidence that Guru Angad Dev used to preach at Baradari. The modern-day common kitchen is named after the Guru’s wife, who encouraged the institution of ‘langar’ at Khadoor Sahib. Many more old structures in the town are yet to be identified. “These buildings are our true heritage, which can inspire the young generation that is drifting away from our values,” Baba Sewa Singh said on Saturday, while confirming that archaeological team from Chandigarh had made the visit.

Sikh scholar Raghbir Singh Bains of Canada and academician Bhagwant Singh Khehra, both associated with Baba Sewa Singh, now plan to approach the Archaeological Survey of India (ASI) with a request to preserve the two buildings. The two are associated with many educational institutes that the environmentalist runs here.

“The ASI has the expertise that we don’t have. We hope it will consider our request,” said Surjit Singh Gopipur, public relations officer of Nishan-e-Sikhi Educational Trust run by Baba Sewa Singh. letterschd@hindustantimes.com


The well
It is in the basement of the modern day Mata Khivi Langar Hall which is built of16th-century Lakhauri bricks and named after the wife of Guru Angad Dev, as sheen couraged the institution of ‘langar’ at Khadoor Sahib.


The Baradari
The 12-door building at Gurdwara Tapiana Sahib is where Guru Angad Dev used to preach Gurbani at Khadoor Sahib, a town in Tarn Taran, district where the second Sikh Guru also developed the Gurmukhi alphabet.