Politics There Is No Such Thing As An 'Indigenous' Briton

There is no such thing as an 'indigenous' Briton 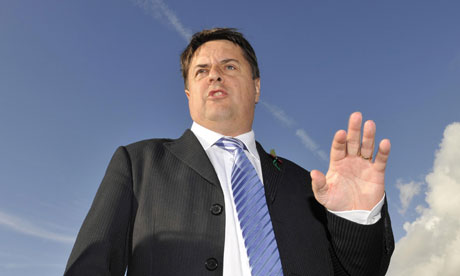 Nick Griffin, leader of the BNP, claims that the English, the Scots, the Welsh and the Irish are 'the aborigines' in the UK. Photograph: Nick Ansell/PA

Articles on Comment is free about indigenous peoples seem to compel a particular kind of comment. The ostensible subject doesn't matter: the one thing that's guaranteed is that below the line someone will ask: "What about the British? Why can't we be indigenous?" Examples on the site this year have been legion.

The commenters concerned are – surely unwittingly – aligning themselves with the nationalist myth-making of the far right. Nick Griffin used his Question Time appearance to declare: "The indigenous people of this island are the English, the Scots, the Welsh and the Irish … We are the aborigines here," and both his party, the BNP, and the English Defence League regularly invoke the UN declaration on the rights of indigenous peoples.

They're not the only one. Other European anti-immigrant parties have sought to align their quest to restrict immigration with the politics of indigeneity. A poster by the Italian political party Lega Nord, for example, portrays a stereotypical 19th-century Plains Indian warrior accompanied with the slogan: "They were subjected to immigration - now they live on reservations!" In the first half of the 20th century, the image of the indigene was adopted by the European far right as an exemplar of nobility, strength and resistance. At the beginning of the 21st century, the far right seeks to adopt a curious narrative of victimhood.

The argument has a certain superficial logic: if people accrue additional rights by virtue of being indigenous, then surely the indigenous British should also have these additional rights, over and above "non-indigenous" inhabitants. If indigenous peoples have the internationally recognised right to seek legislation to resist cultural dilution, surely indigenous British (or Europeans) can do the same with regard to "unwanted" immigration. If simply being first is what matters, surely this has to apply in every instance.

The problem here is with defining the term "indigenous". The dictionary definitions are of little help. After all, most people were born in the country in which they live and thus surely "originate" there; on the other hand, go back far enough in history and no group outside Olduvai, in eastern Africa, can lay claim to being truly "native".

Reflecting this difficulty, the International Labour Organisation, the UN and the World Bank have all chosen not to offer definitions so much as interpretations in their respective declarations on the rights of indigenous peoples. Social anthropologists such as Adam Kuper argue that this is because, in truth, the term is simply being used as a replacement for the "ghostly category of 'primitive peoples'," and that it is just as problematic as that discredited idea.

In legal and political contexts, then, "indigenous" has to be understood as a complex term that is conditional on current circumstance, not as an absolute and unchanging descriptor for a state of being. It specifically recognises that a people or tribe has become marginalised within the dominant society thanks to a history of conquest, colonisation, and/or absorption into a nation state. As the sociologist and anthropologist Mathias Guenther puts it: "Indigenous is a term applied to people – and by the people to themselves – who are engaged in an often desperate struggle for political rights, for land, for a place and space within a modern nation's economy and society." This is why there is frequently a dual emphasis on a group's describing itself as indigenous, and its acceptance as such by other indigenous groups.

To say that these peoples are sometimes disadvantaged is to put it mildly. The Baaka and similar groups in the Republic of the Congo live in appalling conditions, treated as virtual slaves. The process of colonial displacement is ongoing in many South American countries, leading to warnings that entire peoples are still in danger of being wiped out. Even groups sometimes seen in comparison as stable or even privileged, such as Native American nations or the Maori, continue to have considerably lower life expectancy and higher rates of alcoholism and poverty than non-indigenous citizens of their countries.

The fierce insistence of indigenous people on cultural autonomy is in the face of dominant group attempts at cultural genocide. Indigenous peoples have repeatedly been denied the right to speak their own languages, or practice their own religions. Although westerners may automatically be inclined to think of Canadian Indian residential schools or the Stolen Generations of Australia, similar actions have been carried out against many other groups, such as the indigenous Taiwanese.

It could certainly be argued that the word "indigenous" – and related terms such as native, aboriginal, autochthonous and "first peoples" – is unhelpful in its stress on "being first". However, to put it bluntly, this is the term that we have, and it at least does its job of bringing together related problems suffered by some of the contemporary world's most marginalised peoples in their increasingly hopeful quests for self-determination.

Putting the argument into this context explains why the attempt by the far right (and some Cif commenters) to hijack the term to support an anti-immigration stance is profoundly offensive. To use the travails of certain minority groups as a justification for attacking or excluding other minority groups is simply a nonsense. The popularity of the association, however, shows just how deeply certain groups feel themselves alienated from their own nation. The co-opting of the term "indigenous" and its associated "rights" must be seen in those terms – as a byword for disenfranchisement and a cynical attempt to legitimise the targeting of minority ethnic groups.

I am interested in how the far right can possibly justify this stance considering that during the British Raj they displaced huge numbers of people to other countries to work for them with the understanding they became British in doing so - this included lots of Indians and especially Sikhs. Now these people have children and grandchildren etc who were born British. The country has also chosen lots of things they liked from countries of the commonwealth and made them their own, eg curry is the new national dish of the UK!!
Share:
Facebook Twitter Reddit Pinterest Tumblr WhatsApp Email Share Link