For God So Loved Punjab - Spread of Christianity in Punjab 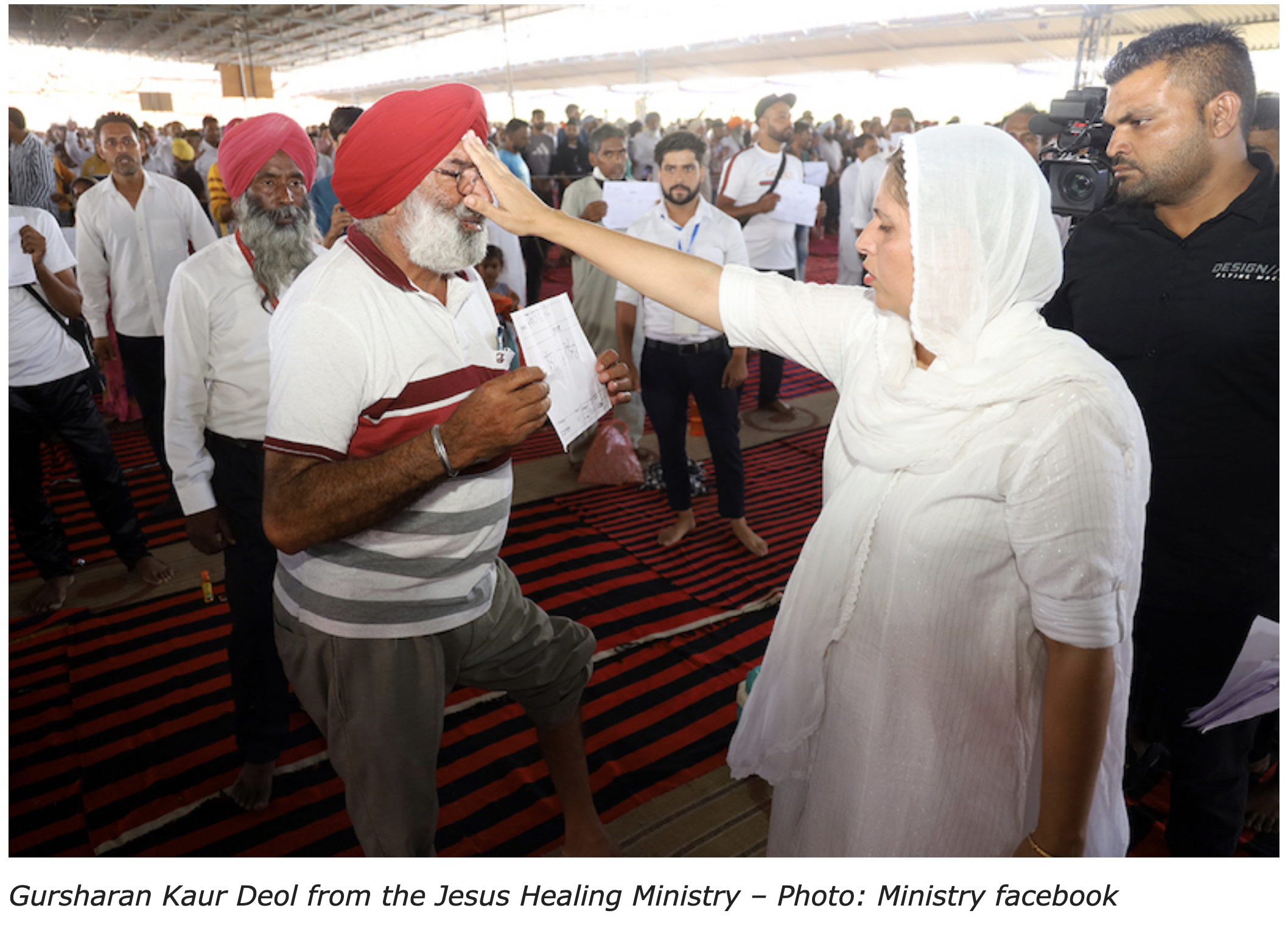 Punjab is the new home for the purveyors of “miraculous and faith healing” that have led to people being duped into losing their live savings and health; and cheated into converting out of their religions. The Sikh Bulletin editor-in-chief Karminder Singh Dhillon analyses the role of the three major forces within Punjab that are responsible for this mess.

Punjab is undergoing a facelift. Not the surgical type but a religious type in which a peculiar version of Christianity is spreading fast enough to give Punjab a new face altogether.

The land of five rivers is about to get the 4th largest church in the world. It is being constructed in Jalandhar, Punjab – the hub of missionaries - at a cost of Rs 2,000 Crore. The capital city of the Sikhs – Amritsar - is home to 700 churches. The SGPC – the primary panthik organization of the Sikhs has gotten a rival in the form of SCPC - Shiromani Church Parbandhak Committee. The land of the Sikh Gurus has become a haven for churches – 8,000 of the 12,000 villages of Punjab have a church that was built in the last ten years. Sikh terminology has found itself new parameters. The congregation in the church is called a “satsang”, the church is referred to as a “gurdwara”, the food served therein is the “langgar” and Lord Jesus is revered as “satguru Jesus” or “vaheguru Jesus.”

None of these have anything to do with the spread of traditional Christianity in Punjab. The Catholic faith has existed in Punjab from the colonial days. St. Mary's Cathedral in Jalandhar, Punjab, India, is the seat of the bishop of the Roman Catholic Diocese of Jalandhar. It was constructed by Vicariate Apostolic Rev. Fr. John Mc Donnel in 1847. No one has, or should have any concerns or reservations with the growth of Catholicism or any of the other denominations of the largest religion in the world.

The kind of “Christianity” that is spreading in Punjab is best described as the scourge of “faith healing.” And it is the business model for people who are anything but faithful to the religion under whose label they operate. Punjab is the new home for the purveyors of “miraculous and faith healing” that have led to people being duped into losing their live savings and health; and cheated into converting out of their religions. People, especially children have died or faced serious medical complications as a result of following the advice of these conmen “faith healers.” Conversions out of their religions at the behest and lure of these conmen have caused familial and social disruptions that threaten the peace and harmony of Punjab.

Despite the fraudulent nature of these groups, the menace is growing rapidly. These “faith healers” have acquired and developed sprawling spaces where thousands gather in periodical special prayer meetings in places such as Ludhiana and Kapurthla. These groups have churned out thousands of videos of “sermons” and “faith healing” that include the testimonies of those “cured” by miracle or prayer of their “pastors” in efforts to increase their flock and build their personal coffers.

Three big outfits are involved in this dubious practice. Leading the pack is pastor Gursharan Kaur Deol’s mass “faith healing” in which she claims miracle cures for kidney stones, joint pain, backache, and “possession by the evil spirits.” She and her husband, Harbhajan Singh Deol run Jesus Healing Ministry at Khojewala village of Kapurthala district and have a huge following. They have kept their Sikh names to make it easier to lure Punjabis and Sikhs into their scam. The second place is held by “Prophet” Barjinder Singh’s Church of Glory and Wisdom which specializes in “blessing people” with salary hikes and miracle cure for serious ailments. Then there is “Apostle” Ankur Narula, who runs the Church of Signs and Wonders at Khambra village in Jalandhar. He too draws thousands to his healing masses. He is the one who is building the fourth largest church in the world at Jalandhar.

Some of these faith healers are suspected criminals. Pastor Barjinder Singh, for instance, was arrested on charges of rape. He has also been accused of swindling people of money to cure them of their cancers.

The Hindu of September 20, 2021 summed up the scourge that Punjab is undergoing at the hands of the conniving “faith healers”. The report states “we have covered how the conversion industry is flourishing in Punjab with proselytizers like “Apostle” Ankur Narula. Gursharan Kaur, rape accused “Prophet” Barjinder Singh etc. using fake miracle cures, deception, illegal foreign funds and the good old-fashioned “rice bag” (including illegally diverted government rations) to lure converts from among the poor underprivileged sections of Sikhs & Hindus”.

Sikhs have naturally expressed concern at the morass of blind faith that Punjab is becoming. The SGPC launched a campaign of “Ghar Ghar Andar Dharamsal” to counter unethical conversions. The Global Sikh Council (GSC) has engaged with a variety of parties within Punjab to find a legal solution to the activity. The GSC’s argument is summed up in its letter to the SGPC. “To control and check such unlawful conversions and nefarious “faith-healing” sessions, many States in India have enacted laws criminalizing such activities called “Freedom of Religion Act (or Ordinance”). The States that have enacted such laws include Gujarat, Tamil Nadu, Madhya Pardesh, Uttar Pardesh, Odisha, Himachal Pardesh, etc. These states have, after the passing of this laws - seen a tremendous drop in the unethical conversions and faith-healing instances.”

Lady Singh Dr Kanwaljit Kaur OBE, President of the GSC has argued that the tactic of using Sikh spiritual terminology such as “satsang,” “gurdwara,” “langgar” and “vaheguru” by these charlatans for their flock, church, food and Jesus respectively amounted to religious and cultural appropriation of the Sikh Faith and its practices, customs, Gurbani and traditions. The objective is to deceive the converting Sikhs into believing that the version of Christianity that was being presented to them by these imposters was no more than an off-shoot of Sikhism.

Why are Sikhs of Punjab falling victim to the scams of “miraculous faith healing” and in numbers that are almost unimaginable? The blame can be apportioned to three groups. The first is dera-waad – the babas, sants and other ban{censored}e thuggs - as titled appropriately by Kabir in the SGGS. These people severely corrupted the divine spirituality of Guru Nanak and brought it down to a self-serving business transaction.

The deal was simple. These crooks in holy garb promised cures, promotions, male offspring, overseas visas and a lot more in return for common Sikhs offering them money to perform ardas, akhand paths, and other ceremonies at their deras. In essence then, over a period of one century, these dera and taksalee sants and babas have made Punjab a most fertile ground for the scourge of pseudo faith healing. These so called sants, babas and bhramgyanis prepared the ground work for people like Ankur Narula, Gursharan Kaur, Harbhajan Singh and Prophet Barjinder Singh to come in. The only difference was scale and the grandiosity of their claims. After dealing with people who were content to be labelled as “agents of God” - Sants and Babas - the hijacked Sikhs were ready to be hypnotized by those who had promoted themselves to “Prophets and God.”

The second part of the blame goes to SGPC. This was a body tasked with governing the affairs of Sikhi and of Sikhs. With annual budgets that sometimes surpassed that of the state government, it could have built schools and universities to educate the people of Punjab; hospitals for them to get treated; banks to provide financial assistance to farmers, old folks homes, orphanages, welfare homes and so much more. But not a single item within the previous sentence was created under the patronage of the SGPC. It’s a body that made space for the Ankur Narulas, Gursharan Kaurs, Harbhajan Singhs and Prophet Barjinder Singhs. The vacuum that is the SGPC leadership, and zero concern for the welfare of underprivileged Sikhs allowed these false apostles and prophets to lure common folk into curing them and much more.

The primary concern of SGPC has been politics. Over the years it sank itself in the cesspool of Akali politics. The Badals ran it by remote control for the past 30 years. Its leadership has been so thoroughly infiltrated by dera and taksali folk beginning 1961 thata the Badals didn’t need much effort. This was the year that both the SGPC and Akali Dal were headed by dera Sants – Sant Chanan Singh became President of SGPC in this year, while Sant Fateh Singh president of Akali Dal.

It’s thus hard to imagine the SGPC doing something – anything at all – to tackle this scourge of blind faith
that is faith healing. Their response has been a half-baked idea with no real action plan labeled “Ghar Ghar Andar Dharamsal.” Will someone inform the SGPC folk that Ankur Narula and Prophet Barjinder Singh etc have already sneaked into the Ghar Ghars of Punjab.

The final part of the blame goes to the Akal Takhat (AT). As paid employees of the SGPC, one can be
excused for wondering why AT Jathedars are being considered as a separate cluster for blame apportionment. It’s because the damage to Sikhi – in particular to the advance of progressive Sikhi – that has been done and is being done by the AT is severe, unmatched and deep. The AT has banned books written by critical and progressive Sikhs.

Like the SGPC, the AT too has been almost completely and thoroughly infiltrated by the ideology that is
dera-waad and taksali. All its Jathedars in the past 3 decades – with one single exception of Professor Manjit Singh – have come from deras, are dera-trained or dera affiliated. A good majority of Sikhs are of the view that it is the Sant Samaj that is running the AT today. In the ultimate sense then, the AT power of excommunication is the sword that is wielded on anyone and everyone who works to make the Sikhi of Guru Nanak relevant to the younger generation. Compared to the archaic version of Sikhi as presented by the dera and taksali folk, Christianity appears to be a modern option.

John 3:16 says that “For God so loved the world that he gave his one and only Son, that whoever believes
in him shall not perish but have eternal life. It takes a huge leap of faith to entertain the notion that God so
suddenly loved Punjab to have sent “Apostle” Ankur Narula and “Prophet” Barjinder Singh to deliver “faith
healing” to them. The truth of the matter is that what’s going on in Punjab has nothing to do with God loving the world or loving Punjab. In fact, it has nothing to do with God.