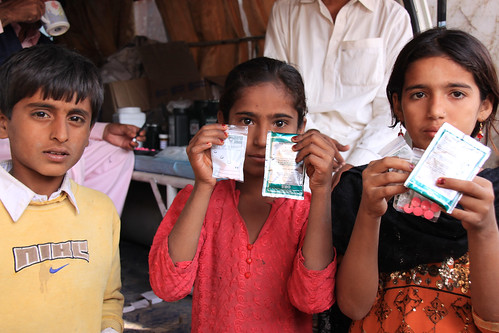 Photo by UK Department for International Development under a CC Licence.

I never dreamed I’d ever wave the flag for Indian pharmaceutical companies. But some years ago, I discovered that India provides essential drugs to most of the world’s economically deprived nations. Many of the poorest people in India and Africa could not afford basic drugs if it were not for Indian drug companies.

Astonishingly, India is known as the ‘pharmacy to the developing world’ and is something of a hero in the fight for affordable drugs for the poor. The reason for this is it’s able to produce cheap generic medicines because it was not issuing drug patents until 2005. This means generic companies are able to mass produce and sell non-patented medicines at a fraction of the price of their multinational corporation counterparts.

India was legally forced, under pain of prosecution, to adhere to World Trade Organisation (WTO) intellectual property regulations in 2005. But it still has a section of its Patent Act, section 3(d), that is designed to prevent the patenting of new uses and forms of known medicines.

Now, lest you are misled into thinking that Indian companies are providing a charitable service, they most certainly are not. Of the top 50 billionaires in India, according to Forbes Rich list, seven are individuals involved with the pharmaceutical industry. Several Chinese pharmaceutical tycoons are also billionaires.

But apparently, multinational corporations want more. So while Indian companies presumably sell at a high enough profit to satisfy our billionaires, for the multinationals this is not enough.

The Swiss company Novartis is currently in the Supreme Court of India fighting to overturn section 3(d) of the Patent Act and keep its patent on a new crystalline salt form of the anti-cancer drug imatinib mesylate which it sells in the market, under the brand name Gleevec, at 120,000 rupees ($2,600) per month.

Since the original drug is not patented in India, generic drug companies produce and sell Gleevec to chronic myeloid leukemia patients at less than one-tenth of Novartis’s price i.e. for about 8,000 rupees ($175) per month. A new patent could give Novartis a 20-year monopoly on the drug, a terrifying prospect for the world’s poor: especially as it could have consequences for so many other drugs.

‘About 80 per cent of anti-AIDS drugs and 92 per cent of drugs for children with AIDS across the developing world come from Indian generic manufacturers,’ says Leena Menghaney of Médecins Sans Frontières (Doctors Without Borders). ‘India is literally the lifeline of poor patients, especially in the poorest parts of Africa. If section 3(d) is overturned, any meaningful effort to make these vital medicines available to the world’s poorest will be put in jeopardy.’

The English words ‘economy’ and ‘economics’ can be traced back to the Greek word oikonomos ‘one who manages a household.’ Logically, this implied the well-being of the family and later of citizens or society.

At what point did well-being move out of the equation and pure greed and profiteering become the order of the day? If governments are meant to govern wisely, they must work for the benefit of the majority, not just the profiteering minority. Yet billions are spent by corporations on lobbyists who try to influence policy affecting the poorest countries.

During the WTO and GATT (General Agreement on Tariffs and Trade) rounds, Congress Watch environmentalists found they could not go near their US government representatives in Geneva and Doha, but fat cat lobbyists were wining and dining them everyday. In the Novartis patents case, currently in the Indian Supreme Court, a judge was recused because social activists exposed the fact that he had gone to a conference organized by Novartis and written a paper expressing views detrimental to the case.

But for every judge exposed there are hundreds of senators, congressmen and ministers who get away with corrupt decisions influenced by lobbyists that are harmful to the interests of ordinary people.