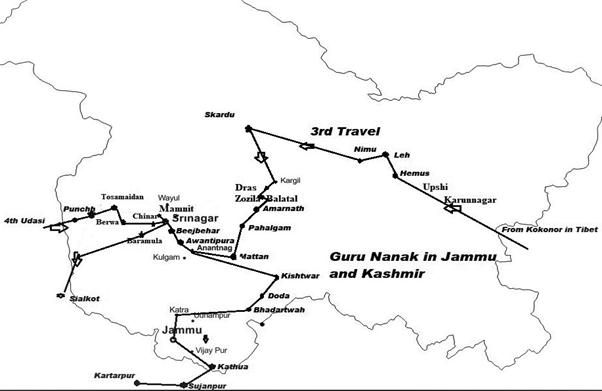 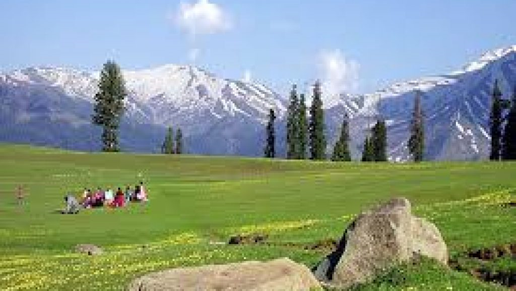 Ten km from Khag in the west Himalayan range, perched in dense forests, the largest lush green pasture is known as Tosamaidan. Its spread is 5 km in length and 2.5 km in width. There are different versions as to why this place is called Tosamaidan. One version mentions that the graziers often gave a call to their cattle saying ‘toi toi’ the word which later became Tosa and when added to maidan became Tosa maidan. In another version, Bhai Mardana used taus instrument in the accompaniment of the Guru’s recitation. After some modifications with time, Taus became Tosa maidan. In another version, Tos Maidan appears to have been "Tosa Marg".[1] In ancient times, it was an attraction for graziers from neighbouring countries Afghanistan, Central Asia and China. Sky-touching deodars fence this pasture presenting a view of a green carpet in summer inviting the camps of the Gujjar community and shepherds with their grazing sheep in the pastures presenting a riveting picture. The fragrance of wildflowers refreshes the whole environment.​

Number of passes in the hills around lead to the Poonch Valley. The most often used pass is called Chinamarg Gali, also known as the Tosa Maidan pass [2] near the Danam Sar lake.[3][4] It provides a steep descent into the Loran Valley, passing by the village of Sultanpathri.[5] At the southwest is another pass called Pathri ki Gali, near the Pam Sar lake (which is also the source of the manin stream feeding the Sukhnag river).[3][6] This provides a gentler descent into another branch of the Loran Valley, which meets up with the first route near the village of Loran. Both the branches of Loran streams feed the Mandi River.[7] [8] To the north of Chinamrag Gali is another pass Jamianwali Gali, which descends into the Gagri Valley. This pass provides a longer route to Poonch. The Basmai Gali (13,000 ft) is the pass which leads finally into Tosa Maidan. Another pass - Poonch Gali - on its right side leads to the valley of Poonch. This pass was deemed to be the safest, easiest, and nearest to reach Punjab between the Jhelum and Indus rivers, in ancient times. It provided easy ascent from the Kashir Valley and was well-guarded by the Loharkot fort.[9] [11] Al Beruni stated that brisk trade was carried out along this route.[10] [12] 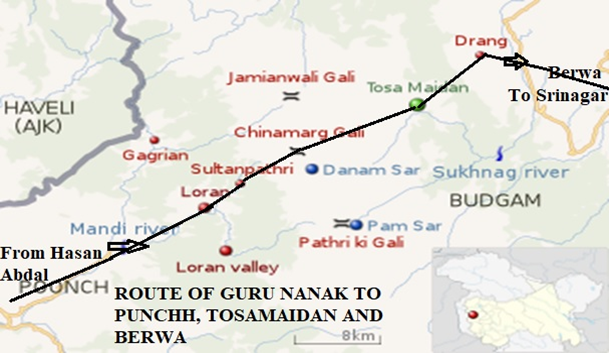 According to M. A. Stein, the Tosa Maidan route starts from the Drang village (going out from the Kashmir valley). After crossing the Tosa Maidan meadow, it ascends gently to an elevation of 13,000 ft at the top of Pir Panjal range. "The ascent is so gradual and easy that... the construction of cart-road would so far meet with little difficulty."[2] There are several streams originating at the top of the range at this locale, all of which join to form the Sukhnag river.[3] Tosamaidan was leased out to army as an artillery range after independence but the graziers have been struggling hard to get it back from the Army.

Mehmood of Ghazni and the Sikh monarch Ranjit Singh attempted to invade the Kashmir Valley via these passes. During his rule, Mehmood of Ghazni attempted to invade Kashmir via the Tosa Maidan route, once in 1003 and another time in 1021. In both the instances, he was blocked by the Lohara fort (Loharkot) that guarded the route. Mahmood was unable to conquer the fort itself. In the second instance, he also suffered a disruption of communications due to a heavy snowfall. The importance of the route declined after the Mughal rule, during which the Pir Panjal Pass was developed as an Imperial Road, and the Afghan Durrani rule, during which the Jhelum Valley cart-road was developed. [11][12] Even Maharaja Ranjit Singh of the Sikh Empire attempted two invasions on Kashmir via the Tosa Maidan route in 1814 and 1819. The first time, his army was divided into two forces, one attacking the Pir Panjal Pass and the other the Tosa Maidan meadow. At the meadow, Ranjit Singh was blocked by the Durrani defences. He also suffered difficulty of maintaining supplies and was forced to retreat.[13] Later in 1819, all the Sikh forces were concentrated on Tosa Maidan and conquered the Durrani forces.[14].

On his return from Hasan Abdal through Punchh, Guru Nanak travelled about 32 kms in hilly terrain to reach Tosamaidan. Bhai Mardana, Bhai Bala, Hassu and Sihan accompanied him along the graziers route later developed into a mule track and a road after independence. Guru Nanak Dev Ji was attracted by the mesmerizing natural beauty of Tosamaidan. He reached here to live with nature for some tiring days of travels through rocky and sandy areas. He sat on the bank of a small natural lake now known as Dammama Sahib. In ecstasy Guru Nanak recited a hymn ‘Sab teri qudrat tu kadar Karta, paaki nai paak. Nanak hukmain andar(i) vekhai vartai vekhai tako taak. (SGGG, M1, p. 454). This hymn beautifully depicts such a natural jewel on land. He stayed here for some days enjoying the nature and singing Lord’s praise and held discussions with the graziers who were in great number at the place grazing their flock. A Gujjar grazier Habla Pahla was so enchanted by the hymns and the music that he became Guru Nanak’s disciple and went along with him up to Srinagar leaving his flock back. 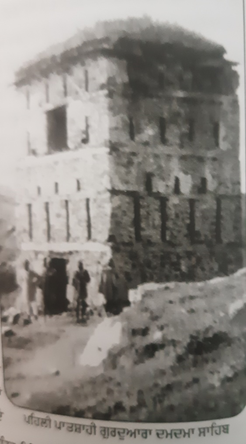 Gurdwara Damdama Sahib Tosamaidan​
The Guru moved next to the place now known as Damdama sahib prominent by a seven storeyed tower erected by Akbar to protect Kashmir from the attacks from marauders from Central Asia, Akbar constructed five such towers along the route from Punchh to Srinagar. These were 1. Chunar Marg, 2. Pajia Marg 3. Gattmarg 4 and 5 Mule route towers. When Akbar inquired about a heap of stones on the route near the pass, he was told that it is the place where Guru Nanak sat and relaxed for some time, hence is known as Damdama Sahib. Akbar did not change the name and erected a tower at the site now known as Damdama Sahib.

Next, the Guru moved to Sant Kutha also known as sadh Kutha. Kutha in Kashmiri word, meaning knee. Here the necklace of the Guru broke and the beads spread all over. He sat on one knee and collected the beads hence the place is known as Sant-Kutha. The spread of the beads was quite vast. Later travellers of the route have been collecting these beads since it was said to be having curing powers for the children in whose neck the bead are put. This legend is well known in the valley. This place is by the side of Tares Bal, a rivulet of clean freshwater too has its own natural richness. It is said that while passing through the area Gujjar Habla Pahla enquired from Guruji whether he felt thirsty (Treh/tres). (Tres to nahi lagi). Guru Nanak stopped and had water from the rivulet. Thereafter this rivulet has been known as Tres Bal meaning thirst-quenching rivulet. Passing through Dirang, Jagirpur, Jaini Gaon, Kudran, Khatrana, Najan he reached Atna. All these villages are of Sikhs and had Gurdwaras.

Next to the Guru, through Atna, went to Berwa on the bank of Sukhnag. Atna and Berwa are known for saints who spread Sikhism in the valley. Gulmarg is also very close to Berwa. At Berwa, a small historical Gurdwara Guru Nanak Charan Asthan was constructed to commemorate Guru Nanak’s visit to the place in 1947 but floods of Sukhnag washed it away. In this place, a new Gurdwara building was constructed in 1975. This Gurdwara is managed by District Gurdwara Management Committee. In Jammu and Kashmir, the overall management of Historical Gurdwaras is in the hands of District Gurdwara Management Committees.

From Berwa Guru Nanak went to Baramulla which has a magnificent Gurdwara on the banks of Jhelum River. Next, Guru Nanak reached Chinar where Gurdwara Chashma Sahib commemorates Guru Nanak’s visit. After relaxing and enjoying the beauty of Dal lake he went to Hari Parbat.

Guru HarGobind Sahib also visited this area, after his release from Gwalior Fort in 1619. Guru Ji returned to visit the valley along with the Mughal Emperor Jahangir on horse-back in 1620 while en-route to Sialkot, Gulatian, Wazirabad, Mirpur and Bhimber. After that, they entered Kashmir through Shupian. Guru Nanak also appeared to have taken this route while going to Emnanad.

One can reach from Srinagar or Badgam by own transport or hired taxi.

1. Wayne Edison, ed. (1990), The Shah Jahan nama of 'Inayat Khan: An abridged history of the Mughal Emperor Shah Jahan, compiled by his royal librarian, Oxford University Press, pp. 127–128: "In that vale resembling Paradise, there are besides several summer retreats such as no other region can boast of. One is called the Godi Marg, another the Tosa Marg; and the profusion of flowers and plants in both those places is so great that you can pluck at least 100 different kinds of blossoms off a single parterre."