Curfew was imposed in this town in Punjab's Mansa district on Sunday after a group of protesters clashed with police and also damaged at least six vehicles. "Curfew has been imposed in Bhikhi town to thwart any untoward incident. A group of anti-social elements had attacked police. They also
damaged around six vehicles, including police vehicles," said district police chief Hardyal Singh Mann in Bhiki on Sunday.

The situation became tense in the town on Saturday after a Sikh preacher, Baljit Singh Daduwal, had used some derogatory words for Haryana-based Dera (sect) Sacha Sauda. After this, a huge number of dera followers had gathered at Bhikhi but police managed to prevent any clash between them and Daduwal's followers.

However, a group of protesters, believed to be the sect's followers, clashed with police while they were trying to enter the premises of the venue where Daduwal was addressing a gathering in Bhiki on Sunday.

"Heavy police force has been deployed at all sensitive locations. We are keeping a close eye on every development and police are ready to tackle any kind of emergency situation," Mann said.

Curfew Continued In Punjab Town After Clashes Between Police And Sikhs

Curfew continued in Punjab town after clashes between police and Sikhs

While police arrested Sant Daduwal, the Sikh supporters of him clashed with police in protest against curbs imposed on holding congregatrion. Heavy police force is deployed in the area.

The violence started when supporters of Sant Daduwal came on streets demanding release of Sand. They allegedly pelted stones on police which retorted to lathi charge. The police beat up people after dragging from their homes. The protestors set on fire police vehicles.

Tension had been simmering in the town for the past two days, as the hardliners, under the leadership of Sant Baljit Singh Daduwal, had been performing congregation in the town. Sunday was last day of the Samagam.

Followers of the Dera Sacha Sauda had expressed apprehension before the police suspecting that he would speak against dera chief Gurmit Ram Rahim. After Daduwal assured the police that he would not speak anything objectionable, the police allowed him to hold the programme.


However, dera followers took an exception to some words that Daduwal used against their religious head on Saturday. Though the timely action by the police averted a clash between them on Saturday, both groups asked their supporters to assemble at Bhikhi on Sunday.

As hundreds of dera followers assembled on the main road here this morning, the police, as a preventive measure, rounded up Daduwal from Gurdwara Jandalisar, located near Kotshamir in Bathinda district, and took him to some undisclosed place.

As the information reached Daduwal’s followers, who were waiting for him at the place of congregation, they turned aggressive and started assembling on the road. The situation turned tense when members of both groups started moving towards each other brandishing weapons.

Meanwhile, a contingent of the police force reached the spot and positioned itself between the two groups. Water cannons and anti-riot vehicles were also stationed there to prevent a clash.

As the senior police officials initiated negotiations, dera followers demanded that Daduwal should not enter the town and that the “samagam” should not take place. On the other hand, Sikhs were reluctant to leave the place before the dera followers did so and their leader Daduwal was released.

As the radicals broke into groups and started attacking the police from various corners, streets and even from the roofs of buildings located nearby, police personnel found themselves outnumbered.

Finding the situation turning ugly, the Deputy Commissioner, Mansa, imposed a curfew in the town and the police also resorted to firing, the reports said. 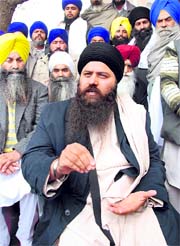 
All 57 radical Sikhs, including Sant Baljit Singh Daduwal, a hardline Sikh preacher, who were arrested by the Mansa Police on Sunday, were released today. ​


Acting upon the state government’s directions, the police released all of them unconditionally and even initiated a process to withdraw the case. “This has been done in the interest of the state as the government wants to restore normalcy,” said Mansa SSP Hardyal Singh Mann.​


However, finding tension prevailing, curfew was kept in force at Bhikhi town for the third consecutive day with a relaxation of three hours twice.​


Daduwal, along with 11 others, was taken into preventive custody on Sunday morning from Gurdwara Jandalisar as his “objectionable remarks” had created uneasiness among followers of the Dera Sacha Sauda on Saturday. Irked over his arrest, his followers had clashed with the police at Bhikhi town on the same day. Later, the police arrested 45 of his followers from the spot and booked them under Sections 307 and 353 of the IPC on Sunday. In the case, over 100 unidentified persons were also included but they could not be arrested.​


Facing the prospect of statewide protests, the state government today directed the district administration to order their unconditional release. Following this, Daduwal, along with his 11 followers, was released from the Ferozepur Central Jail at 2 am today. To ensure that they do not go anywhere else, the Mansa Police escorted them to Gurdwara Jandalisar in Bathinda at 4 am. ​


After a couple of hours, Daduwal held a press conference at the gurdwara and gave an ultimatum that if his followers lodged in the Bathinda Central Jail were not released till January 6, the Sant Samaj and other Sikh organisations would hold a joint meeting and chalk out an aggressive course of action. “It is quite surprising that without any evidence, the police arrested me and then without asking for a bail bond, released me. I ask bureaucrats as well as politicians to decide whether I am guilty or not and stop this drama of arrest and release,” he said.​


“As I am out of jail now, I will do my best to build pressure on the government. If they think I will sit quiet, it’s their misconception,” said Daduwal. Ironically, after some time, the Mansa Police called up Daduwal that they were about to release all 45 of his followers from the Bathinda Central Jail unconditionally. Following this, Daduwal, along with a large number of followers, reached the jail and received his followers. Talking to the media, Daduwal said the government had succumbed to the pressure that they all be released. Meanwhile, he announced to hold a religious congregation in Sangrur district from January 7-9. “Though the government is doing its best to foil our attempts, we are committed to hold it at any cost,” he said. He also accused the government of dancing to the tunes of the Dera Sacha Sauda to seek votes in the next Assembly elections. Targeting the Jathedar of Akal Takht, Daduwal said, “We have been struggling to get the edict issued by Akal Takht against the Dera Sacha Sauda.​


But neither the ruling party, which claims to be a Panthic party, nor anyone else, including the SGPC, seems interested in it. If Akal Takht is unable to implement it, the edict must be taken back,” he added.​